Herman Goldstein, professor emeritus at University of Wisconsin Law School, will receive the 2018 Stockholm Prize in Criminology for his decades of scholarship on policing, Stockholm University announced today. The international prize recognizes excellence in criminology research or in the application of research shown to significantly reduce crime or advance human rights. 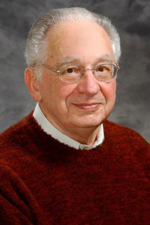 Spanning more than 50 years, Goldstein’s scholarship includes two groundbreaking books and many articles on policing reforms. He is credited with introducing more just, more effective strategies for police to carry out their duties, everything from dealing with crime to protecting free speech to caring for the homeless and mentally ill. In awarding this year’s prize, the Stockholm jury not only praised Goldstein’s body of work but commended its accessibility to broad audiences.

In 1977’s “Policing a Free Society,” Goldstein weighed public perceptions of the police against how police actually respond to the day-to-day complexities of their jobs. The book’s analysis of police discretion has widely informed police administrators’ policy making to promote better police accountability and transparency.

In “Problem-Oriented Policing,” published in 1990, Goldstein proposed a prevention-oriented approach to policing, one that focuses on the intensive study of discrete problems and tailor-made responses to them. It calls on officers to look for patterns of behavior, determining the root causes of problems and engaging with their communities to identify solutions.

Police agencies across the United States and abroad have implemented Goldstein’s strategies to tackle issues as diverse as drug trafficking, domestic violence and landlord-tenant conflicts. In Madison, Wisconsin, police used the concept to make a challenged neighborhood safer and restore a local park to its full intended use. Madison police also worked with local public and private agencies to deal with an annual Halloween celebration that had mushroomed out of control. The solution, a gated, ticketed event known as Freakfest, now draws up to 30,000 attendees each year with minimal disruptions.

Law School Dean Margaret Raymond says Goldstein is an important part of the Law School’s story because his work embodies its focus on learning, teaching and studying the law, not just as it is written but as it is experienced.

“Professor Goldstein’s books on policing are renowned classics of his field, and his work continues to inform and advance contemporary thought and best practices on policing. I congratulate him on this remarkable, well-deserved honor,” she says.

Before joining UW Law School’s faculty in 1964, Goldstein served for four years as executive assistant to Chicago police superintendent and reformer O.W. Wilson. In the late 1950s, he was staff investigator and analyst for a landmark ten-year American Bar Foundation study of policing and the criminal justice system.

Goldstein will accept his prize in Sweden next June, where he will also attend a colloquium focusing on his work.

Watch a video of Professor Goldstein discussing his work.

Submitted by Tammy Kempfert on November 7, 2017