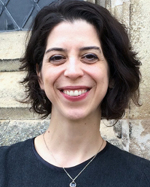 Sharafi is a University of Wisconsin Law School professor specializing in the legal history of South Asia. Her 2014 book examines the role of the Parsis--an ethnoreligious minority that emigrated from ancient Persia to India--in making colonial legal culture.

A South Asian edition of Sharafi’s book was published in 2017 by Permanent Black.