Herman Goldstein, a University of Wisconsin Law School professor emeritus whose research on policing had global impact, died Jan. 24 in Madison, Wisconsin. He was 88. 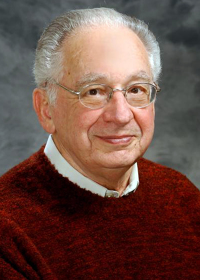 In a career that spanned more than five decades, Goldstein would go on to change the way police look at crime. His contributions to modern policing — outlined in the books “Policing a Free Society” (1977) and “Problem-Oriented Policing” (1990), as well as many articles — won worldwide acclaim.

Most recently, he received the 2018 Stockholm Prize in Criminology, an international award that has been called the Nobel Prize of criminology.

"We want to move more and more to the surgical element where we don't do unnecessary damage in the course of trying to do good,” Goldstein said in 2017. “And we reach out to people and to the community in ways that ultimately have an effect that is both effective and fair.”

Goldstein is best known for his concept of problem-oriented policing, a framework for reform that has been adopted by police agencies everywhere, from Madison, Wisconsin, to Scotland Yard. In it, he called for the police to identify specific problems the public expected them to handle, to dig deeply into understanding each problem in detail, and to think freshly and creatively about the best possible tailor-made response to that problem.

He consulted on many national policing commissions, including the President's Commission on Law Enforcement and Administration of Justice, the National Advisory Commission on Civil Disorders, the National Institute of Justice, and New York City's Knapp Commission. Goldstein also lent his expertise to the Madison Police Department and other police agencies to help develop innovative solutions to specific problems.

Law School Dean Margaret Raymond says Goldstein is an important part of the Law School’s story because his work embodies its focus on learning, teaching and studying the law, not just as it is written but as it is experienced.

"Professor Goldstein fundamentally changed our understanding of policing, and his theories have altered police practices around the world. We are honored to have been a part of his legacy," Raymond says. "His stature in his field was matched only by his genuine kindness as a colleague and friend. He will be sorely missed at the Law School."

This article appears in the categories: Faculty