A digital archive set to launch this month at UW Law Library sheds light on the legal aspects of the world’s worst industrial disaster.

According to Marc Galanter, UW professor emeritus of law and South Asian studies, more than 20,000 people died and hundreds of thousands more were injured as a result of the 1984 chemical leak that took place in Bhopal, India. 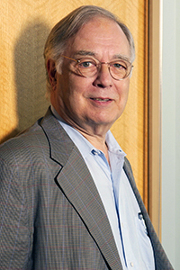 The new online collection — “Bhopal: Law, Accidents and Disasters in India” — chronicles the legal proceedings that followed and commemorates the role Galanter played in trying to secure compensation for the victims. At the time of the spill, Galanter was one of only a few American scholars working on Indian law. He signed on to help the Indian government keep the case in the United States, where plaintiffs believed they would get fairer, and faster, treatment.

“We were arguing that India’s judicial system was not equipped to handle a case of Bhopal’s magnitude and complexity. Its backlog on civil cases was massive, and Indian tort law was undeveloped,” he says of his testimony before a U.S. federal court.

Representatives for Union Carbide Corporation, the American parent of the subsidiary that managed the Bhopal plant and the defendants in the case, wanted the lawsuits to be heard in Indian courts. A judge ultimately ruled in Union Carbide’s favor, a verdict Galanter attributes to misleading testimony about the capacity of the Indian courts.

For Bhopal’s victims, justice has not been served by India or its judicial system, he says: “More than three decades later, many of the survivors are still seeking adequate compensation. The site has yet to be fully cleaned up, and reforms to help prevent future accidents have been insufficient.”

Now, thanks to gifts amounting to $30,000, Galanter’s extensive collection of legal documents and news clippings relating to the American and Indian litigation has been digitized and housed at UW Law Library. The searchable archive contains more than 3,600 items and is expected to grow.

Support for the project comes from lawyers Michael Cirisi and Bruce Finzen, who represented the government of India in the Bhopal matter, along with Gary Wilson, a Minneapolis attorney and UW Law School graduate. As a law student, Wilson worked with Galanter to prepare his testimony in 1985.

UW Law Library will formally launch the archives on October 19, 2016, in conjunction with a half-day workshop that includes a session on “Law and Accidents in South Asia.” At the event, Professor Jayanth Krishnan from the Maurer School of Law at University of Indiana will present the keynote, “Reflecting on the State of Law and Society Scholarship on India: The Contributions of Marc Galanter.”

Submitted by Tammy Kempfert on October 13, 2020

This article appears in the categories: Features