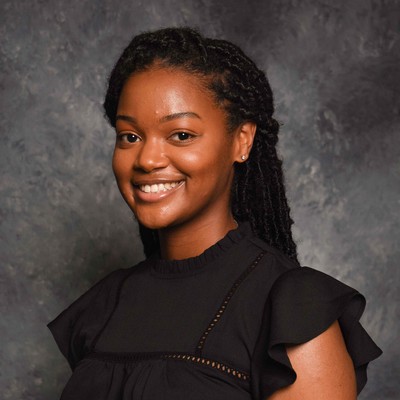 I've been playing the piano and the violin for 15 years and I was a ballet dancer for 12 years.

My favorite movie is “Legally Blonde.” Very cliché, I know. I watch it at the beginning of every semester to get my head in the game.

Inspired to Make an Impact

Makaila "Iman" Davenport was born in Madison, Wisconsin, but spent most of her life between Northern Virginia and the Virginia Beach area.

“I grew up around lawyers, and I have witnessed firsthand the impact a lawyer can make in someone’s life,” said Davenport.

Both her father and uncle attended the University of Wisconsin Law School, but it was ultimately the school’s commitment to diversity and Law in Action mission which drew Davenport to the program.

“After speaking with several current students and [Associate Dean of Admissions and Financial Aid] Rebecca Scheller, I knew this was the school I wanted to attend,” said Davenport. “The staff, faculty, and student body genuinely care about my success and have become an amazing support system.”

Davenport is involved in several extracurricular activities including the Wisconsin International Law Journal, the Wisconsin Moot Court Board, and is a Student Ambassador. She is also the current president of the Black Law Students Association (BLSA), a group she became involved in during her first semester at the university.

“This organization is extremely important to me because BLSA has become a safe space for Black students within the law school,” said Davenport. “We have an amazing general body full of students of color and allies that want to help in any way they know how.”

Davenport said BLSA was a haven during her first year of law school.

“I was apprehensive about stepping into a new environment, especially during COVID-19, and I was worried that I wouldn’t be able to get to know any of my classmates,” she said. “I always heard about the support systems that are almost ‘necessary’ during law school because of the immense amount of stress, and I had no idea how I was going to be able to create any of those meaningful friendships during a pandemic.”

But before she even stepped foot on campus, a few BLSA members reached out to Davenport via social media.

“They asked if I had any questions or needed help preparing for my move to Wisconsin,” she said. “When I finally got to campus, I immediately joined BLSA’s mentorship program, which allowed me to have a mini village of people I could reach out to whenever I needed.”

We have an amazing general body full of students of color and allies that want to help in any way they know how.

Davenport received advice about classes, study tips, had small coffee breaks throughout the day, and even had one of her mentors offer to get groceries for her while she was busy with work. It was all these experiences which pushed her to run for president this year.

“I wanted to make an impact on the current 1L class and help them the same way my mentors helped me,” she said. “BLSA truly is a family, and one I’m proud to be a part of.”

Of all her meaningful experiences at UW Law so far, Davenport said the most memorable has been assisting the Dean of Admissions with interviewing candidates for the new Dean of Diversity, Equity and Inclusion position.

“Dean Daniel Tokaji and Dean Scheller value student input, and I was fortunate enough to take part in the process,” she said.

After graduation from the University of Wisconsin Law School, Davenport would like to be a litigator with a focus on white collar crimes.

“UW Law is preparing me for this path by assisting with the legal research skills I need to be successful,” she said. “I want to be able to make a difference in someone’s life in the best way I know how, and for me, that path is the law.”

Davenport is also taking several classes created to give students real-world experience and hopes to participate in a clinic before graduation.

Davenport has two little brothers, Robert and Solon, two dogs, Drake and Dottie, and a very supportive mother. She graduated from Hampton University in 2018 with a Bachelors in International Relations and a Minor in Military Science. Outside of school and work, she enjoys running, reading, trying new activities, and spending time with friends and family.

This article appears in the categories: Features, Students