Before discussing her new book, Sumudu Atapattu wants to make one thing clear: human activity is causing the planet to heat up.

“We can no longer dispute it,” she says. “Scientists agree, and nearly 200 nations endorsing the Paris Accord agree. Climate change is here, and it’s now, and we need to take strong action to address it.” 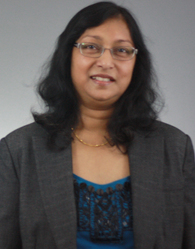 That settled, Atapattu says she wrote “Human Rights Approaches to Climate Change: Challenges and Opportunities” to shift the emphasis of the climate debate to people and their rights. The book, published in October by Routledge, looks to international law for answers to hard questions about mitigating climate change and preparing people for its impacts.

Atapattu teaches environmental law at University of Wisconsin Law School and directs the school’s Research Centers. She has long argued that climate change threatens fundamental human rights, such as the right to clean water and healthy food, the right to a safe place to live, even the right to life itself — and that the world’s poor are hardest hit.

“We’re talking about millions who are in immediate danger, or who will eventually be displaced, by rising sea levels, extreme weather events or resource scarcity,” she says. “We have a duty to protect their rights.”

To illustrate, she describes the plight of the impoverished village of Kivalina, Alaska, located on a fragile island above the Arctic Circle. Record-high ocean temperatures have caused the sea ice that surrounds the low-lying island to thin. With sea levels rising and its protective ice melting, the island is eroding at an alarming rate. Experts predict Kivalina will be completely submerged in ten years.

“When an entire community has to move due to climate change, what rights do its citizens have? Do they get to decide where and when they go? Does the new place have access to basic resources?” Atapattu asks.

Her questions are rhetorical: according to Atapattu, the U.S. is legally bound to help relocate Kivalina residents to a safer place, and in doing so, it must employ a broad human rights framework. But so far, the funds necessary for relocation haven’t been allocated, and there’s no government mechanism in place to assist in a move.

Atapattu attended a portion of the historic United Nations Conference on Climate Change in Paris late last year, when 195 countries adopted a landmark global climate deal. One of the main developments coming out of the conference was the shared commitment to limit warming to no more than 2 degrees Celsius above pre-industrial levels, with a longer-term goal of holding temperature increases to less than 1.5 degrees. For some countries, a 1.5 degree temperature goal will mean sharp cuts in emissions; for others, particularly those living on small island states, it is a matter of survival.

Atapattu left Paris with a sense of guarded optimism. “If we can’t stop sea levels from rising, we can expect a huge humanitarian catastrophe with regard to low-lying small island states. Their citizens stand to lose everything, including the land their families have lived on for generations. That is in spite of their minimal contribution to the problem,” she says.

Explicit references to human rights, which appeared in early drafts of the Paris agreement, were removed from the document’s legally binding section in its final draft. While that omission angered some climate activists, Atapattu says that nations’ responsibility to uphold and implement international human rights standards was never in doubt. 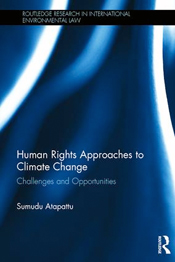 “It was disappointing to lose the human rights language, but it is not the end of the world,” she says. “It’s important to remember that states have already accepted human rights obligations under international law, with or without explicit references to human rights in the Paris Accord.”

Students in Atapattu’s environmental law classes learn about those existing obligations as they apply to climate change. Ultimately, she hopes to bring her students, as future lawyers and scholars, to the table to work toward climate change solutions, along with scientists and policy makers, economists, health workers, business people, and others.

“We need more integrated approaches to addressing the problem,” she says. “Finally recognizing all the links — between climate justice and the economy, national security, agriculture and public health — is a good start.”

This article appears in the categories: Features, UW Women in Law