John Gross has been named director of the Public Defender Project, an experiential learning program based at the University of Wisconsin Law School. 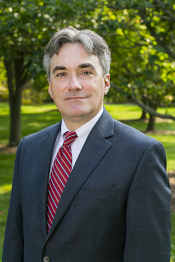 UW Law students enrolled in the Public Defender Project earn academic credit while receiving on-the-ground training in public defender offices throughout Wisconsin. In his role as director, Gross supervises students during their summer internships and teaches the project’s two classroom components. Prior to their public defender experiences, students take Trial Practice and follow up with a reflective seminar, Ethical Issues in Criminal Justice, in the fall. Gross also teaches Introduction to Substantive Criminal Law to first-year law students.

In addition to his teaching duties, Gross plans to use his expertise on indigent defense delivery systems to serve both as a resource for public defenders in Wisconsin and as an advocate for indigent defense reform nationally. That commitment to giving back is a century-old UW tradition known as the Wisconsin Idea, the belief that the university should use its resources to help improve the lives of citizens.

“I think at this particular moment in time, when society seems to finally be willing to reconsider the way we police and to try to address the racial disparities in our criminal justice system, the Wisconsin Idea is incredibly important,” he says. “Those of us who have worked in the criminal justice system, studied it and thought about ways to reform it need to speak up and help legislators craft reforms at the local, state and national level.”

Gross, who earned a J.D. from Hofstra University’s law school, started his career as a public defender with the Legal Aid Society in New York City. He later directed criminal defense clinics at Syracuse University College of Law and the University of Alabama School of Law, worked as indigent defense counsel at the National Association of Criminal Defense Attorneys, and most recently, served as director of policy and practice for the Defenders Association of Philadelphia.

According to Gross, he’s had the good fortune to do work he loves all through his career. “I’ve been on the front lines as a public defender doing trial work. I've taught clinical classes on criminal defense, done policy work for the nation's private criminal defense bar and also for one of the largest public defense providers in the country, the Defender Association of Philadelphia.”

“And now,” he adds, “I get to direct the Public Defender Project in Wisconsin.”